UV Performing Arts is a place where students of all ages and levels of ability participate in an array of dance, music, drama programs with professional instruction and wonderful performing opportunities. UV Performing Art’s faculty boasts outstanding professional artists, performers and teachers.

Eri Usui-Villareal has been an educator, producer, choreographer and performing artist for the past 30 years in such places as Japan, Canada, and across the USA. She started training at age of 8 in all genres of dance such as Ballet, Jazz, Tap and traditional Japanese dance in Tokyo, Japan.

In 1991, she joined professional program at Ballet Arts Center in New York City and received a scholarship at Steps on Broadway where she studied with Jan Miller, Suzi Taylor, and Fred Benjamin. She also studied The Limon program at Jose Limon school.

She has performed in several choreographers including Janis Brenner, and Kathleen Cruz, as well as movies, King and I musical, USA TV Network shows, and dancing for various artists around the city include Lincoln Center and Joyce Theater. She became a dancer/assistant director of Marcy Simon and Company in New York City and performed for six years.

She moved to Seattle, WA in 2004. In 2010, she found ArtRise Dance – with where she taught various dance classes for youth and adult and directed performances and musicals including schools in Seattle, WA.

In 2017, she became an owner of UV Performing Arts – a place where students of all ages and levels of ability participate in an array of dance, music, drama programs with professional instruction and wonderful opportunities. She is an artistic director of youth performing group 'UV DANCE SQUAD' and supports their hard work and dedication for performing arts.

Her goal as an educator is to inspire young students to find their own voice in dance through movement and to support their journey as a performing artist.

Lena Nishihara - began her Classical Ballet training at age of three and studied Jazz and Modern dance by her mother who is a director of dance school in Japan. She also started gymnastic when she was five years old and received 4th place at high school gymnastic  competition in Tokyo.  She moved to New York in 1995. She graduated The Ailey School (Alvin Ailey) and received a scholarship at Steps on Broadway and became an assistant teacher for Slam who is a lead dancer in Madonna's music video 'Vogue' and her world tour. She later joined the Alvin Ailey American Dance Theater school and  performed as a soloist at their showcase.

Mayumi Omagari began her classical ballet training at Tatsuo Kasuya Ballet in Tokyo, Japan. She later joined the company and performed in such classics Swan Lake, Giselle, Nutcracker and Sleeping Beauty. She also toured Japan as a member of the Japan Ballet Association in Coppelia. After moving to New York in 1994, she began studying with Finis Jhung at The Broadway Dance Center and was cast in the German productions of the musicals Cats, Beauty and the Beast, Joseph and the Amazing Technicolor Dreamcoat and Starlight Express. In the United States, she has performed on Broadway such as Pacific Overtures starring B.D Wong http://www.theaterscene.net/musicals/pacific-overtures/archive/, has appeared on National tours including King and I at 5th Ave. Theater in Seattle, WA and in numerous regional theater companies. Mayumi is a guest professor at Showa University of Music's Musical Theater department. She is a member of AEA / AGMA and currently in Madame Butterfly and Turandot at The Metropolitan Opera.  Mayumi is a TEAM FINIS classroom and workshop demonstrator and teaches the Finis Jhung Ballet Technique.

Stephanie Reese is an international singer, actress and philanthropist. Her solo career has taken her around the world performing roles such as Kim in the German production of Miss Saigon, Esmeralda in the Disney World Premier of the Hunchback of Notre Dame and Princess Tuptim in the King and I at the Palladium Theater in London’s West End, Princess Kogajin in a new musical Marco Polo the Untold Love Story at the Cultural Center of the Philippines and a La Viegtiem Theater in Paris. A versatile singer, who has done a sold-out solo performance at New York’s Carnegie Hall, performed shows with Patti Labelle and Natalie Cole.

Beyond the demands of her career, Stephanie continues to pursue her philanthropic works around the globe with passion and conviction.

Mayumi Harada is a singer-songwriter, vocal trainer and writer. She has released four albums with AVEX Japan, and one CD book with SONY. As an author she has written fifteen inspirational books that were published in Japan and Korea. Her debut book publication sold more than 750,000 copies in 2004 and was endorsed by Ms. Yoko Ono. As an artist development specialist and a vocal producer, she has worked with many J-POP and KPOP stars. One of Mayumi’s albums from 2000 became available in the US on Spotify and iTunes under the unit name "Groove Crystal”. She is starting off 2021 hosting her first online seminar presented by the most prestigious Japanese magazine called Kateigaho and currently working on her first translation project regarding a global mega pop star band. As a “ Stage Mom” (for one year) she toured the US and Canada with her youngest son Julian who was cast as “Lawrence” in the First National Tour of “School of Rock: The Musical”.

Kota Otsuka is a producer, singer and choreographer both US and Japan. He graduated The Lee Strasberg Theatre & Film Institute in New York. He was a first Japanese cast of HAIR with European tour and also joined Starlight Express in the German production. He was a dance captain of off Broadway musical Tarnish in New York City.

He is a director and producer of youth acting school 'Uni-Kids' in Tokyo, Japan.

Emma Usui-Villareal - began her Classical Ballet training at age of three and studied Jazz, Contemporary, Lyrical dance.  She is an original member of youth performance group and worked as an assistant choreographer for UV DANCE SQUAD. She has performed at Walt Disney World, Seattle Center, Bellevue Youth Theater, International School. She performed with Snowflake Lane Bellevue Square winter parade in 2018. She loves to teach and assist instructors of UV Performing Arts. Currently she is helping UV Performing Arts as an Administrative Assistant.

Allie Swendt - began her dance training at age of three and studied Jazz, ballet, and contemporary. She has been a member of youth performance group for 10 years and she is currently placed as advance team Select with UV DANCE SQUAD. She has performed at Walt Disney World, Seattle Center, Bellevue Youth Theater, and Woodland Park Zoo. She loves to teach and is an assistant instructors of UV Performing Arts Jr. and Jr. Ballet.

Rio Tabion - began her dance training at age of five and studied Jazz, ballet, and contemporary with UV Performing Arts (ArtRise Dance). She has been a member of youth performance group for 7years and she is currently placed as advance team Select with UV DANCE SQUAD. She has performed at Walt Disney World, Seattle Center, Bellevue Youth Theater, and Woodland Park Zoo. She has placed "Gold" at the NYCDA dance competition and "Outstanding Performance Award” at Fleur Ballet Competition" in 2022.  She is a dance captain of UV DANCE SQUAD, assistant choreographer, and assistant instructor of Ballet I and Contemporary I at UV Performing Arts.

Sienna Horita-Nguyen - began her dance training at the age of eleven.   She joined  youth performance group UV DANCE SQUAD in 2021.  She has performed at Cascadia Art Museum and Seattle Center. She also has been learning Judo since 2014 and  is an  assist instructor for Peewee class.  Currently she is an assistant instructor of BCA Dance Jr. at Bellevue Children's Academy.

Chihiro Horita-Nguyen has been working with UV Performing Arts as Costume and Prop Specialist since 2018.  She comes from a family of artist who introduced her different art media.  She has brought her passion for arts & crafts and dexterity to the UV family.

Yuko Kanazawa is originally from Shoeline, WA and currently studying in Japan.  She is also a certified instructor in MS Word, Power Point, Excel and Access. When she is not behind a computer, she enjoys spending time with her dog in nature. 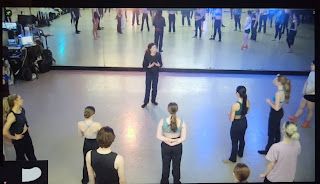 I visited Steps on Broadway in NY this summer where I studied as a scholarship student with Mayumi Sensei and Lena Sensei. I used to take Suzi Taylor’s class every single day. She is my teacher, mentor, and inspiration. It would be impossible to list all she has done to encourage me. She is very busy traveling all around the world to teach her wonderful class and has just taught an in-person and a virtual class at Steps recently. I am very grateful my student gets to learn from her as I did when I was a student. It is a very special feeling. I know her class is not easy and I am so proud of her who attended. Way to go! 若い頃奨学金をいただきダンスクラスを受けていたニューヨークのダンス学校、Stepsにこの夏、子供達と行ってきました。ここではまゆみ先生やレイナ先生もダンスを勉強していた学校で、私は私の恩師スージーテイラーのクラスを毎日受けていました。彼女からの数えきれない励ましは感謝しきれません。彼女の言葉は生きる力となっており、今の私を築いてくれたと言っても過言ではありません。 スージーは現在も素晴らしいクラスを教えに世界中で大活躍されていますが先日Stepsで彼女のクラスがあり、オンラインで私の生徒が受講しました。自分が汗を流して毎日クラスを受けていた同じ教室、スタジオ3で教えるスージーのクラスは上級者向けの難しいクラスで、そのクラスを私の教え子が２時間しっかり受けられたことに何とも言えない嬉しい気持ちと感謝の気持ちでいっぱいです。頑張ったね！
>> Read More